Grace Hale, a long time camper turned counselor began a new phase of life this past fall as she graduated from high school and started a gap year as an au pair in a small town in Germany. Grace keeps her friends and family updated through a blog named The Grace Unknown. She recently published her reflections of Keystone Camp and how camp has shaped her into the person she is today. Enjoy her reading her entry below!

Hidden in the Cloud somewhere is a video of eight-year-old me in dance class. I think it’s parent’s day, because I’m introducing myself. My hands are behind my back, my head is down, and my voice is low and tentative. I’m just screaming SHY. My five-year-old sister, the exact opposite. There are countless videos of her in dance class making up her own dance moves, paying no heed to the actual choreography. My family looks back at those videos and laughs because, in a way, they kind of exaggerate how we are today. I have always been the more introverted and one, and Cate the more carefree, outgoing one. So, how did that shy little girl end up moving to Germany right after high school? From a place you might not expect… summer camp.

Let’s start from the beginning. I was ten, I believe, when I first went to Keystone Camp (an all-girls camp in North Carolina), my sister eight. We were both lucky and unlucky because our mom came with us, as she took the job as Photo Mom. Lucky because we weren’t completely separated from family, and, even though we couldn’t really talk to her with other campers around, drew comfort and support knowing she was there. Unlucky, though, because we never fully got the “camp” experience of being completely away from home. Because of my mom’s job, we headed to camp a day before everyone else. It was strange seeing camp for the first time with no one really in it, besides counselors and staff. Even so, you could feel the anticipation from everybody. I wouldn’t really understand this anticipation until I became a counselor, but I recognized it that night. And it proved to me that there was something about this camp,something special.

The opening day was chaos, a good chaos, but chaos nonetheless. There were girls everywhere. Walking up the Green. Meeting their counselors. Unpacking their trunks. Reuniting with old friends. Everything was overwhelming. From unpacking to meeting cabin mates to the dreaded swim test to activity sign ups. It was a whirlwind, so drastically different from just the night before, and yet, I was having the time of my life. Everyone was incredibly welcoming and supportive. I made fast friends in my cabin, and my counselors were so enthusiastic about everything. Each new day brought a new challenge, and each day I was coming farther and farther out of my shell. There was something special about Keystone, because there I felt a sort of freedom I had never felt before. I could make my own decisions, choose what I wanted to do. I could let go of all my “outside world” problems and focus on myself. But, most importantly, I could be who I wanted to be. With my friends, I could be as crazy and goofy as I wanted, and I didn’t feel embarrassed. Keystone tugged at a string inside me and allowed me to unravel and let loose, to live a little. I could even go so far to say that I became extroverted at camp.

As I grew up, camp became increasingly powerful. I might not have known it then, but each year was shaping me into a better, stronger human being. I learned selflessness, independence, self-confidence, gratefulness. Participating in activities like riflery and canoeing gave me confidence and strength to accomplish the hard tasks. The community of girls supporting other girls opened my eyes to the importance of that community not just at camp, but in the rest of the world. Hearing, “Other Girl First” around camp helped me practice selflessness. Trying to pass levels in activities (especially in the short two-week session) taught me patience and persistence. Observing other girls pass through barriers and roadblocks taught me resilience and grit. Moments that put me a little out of my comfort zone or intimidated me taught me about good risk-taking and the beautiful result that comes from it. The decision to become a counselor was not a hard one to make. A chance to be a role model. To influence other girls who were like me. To empower them. It was a privilege. And, once again, even as a counselor, camp was teaching me, shaping me, and impacting my life.

No longer am I that timid girl from the video. I understand that I don’t need to be perfect; I can make mistakes, and come back from them better than before. I understand my own power, that I can do whatever I set my mind to with enough determination and will. Keystone helped me realize that power inside me, and with that power, I made one of my dreams come true. I chose this gap year. I made the au pair account. I found my family. I orchestrated it. And I made it work. Me, and not anyone else.

So, thank you Keystone for all you have taught me about life and about myself. I wouldn’t be here without you. 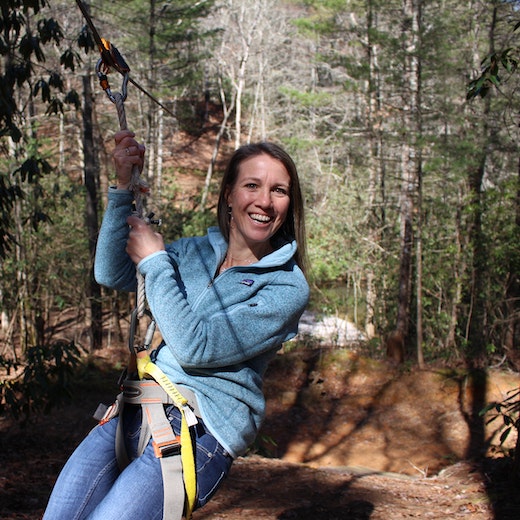 Heidi fills the role of Director at Keystone. Always passionate about the outdoors, Heidi worked in the trips program at Keystone Camp and brings over twenty-five years of experience in camp counseling, teaching, coaching and leading.